The wonderful experience of father and child building projects together has been around since the origins of the family unit, but became prevalent in the post WWII suburban boom in America. Everything from building a model airplane, a pine-box derby car, art projects or even a large back porch can provide both bonding and hands-on educational experiences for kids and parents.

One of the great building, art, and construction experiences happens every September in Missoula during the Spontaneous Construction event, more commonly known as SponCon. The event is created and hosted by Home ReSource, a local non-profit organization that receives donated reusable and reclaimed materials that people can buy for home projects, art, and a host of other uses.

30 teams compete every year, about half of them professional artists and the other half amateurs that come out to try their best at creative innovation. The teams have free run of Home ReSource’s facility to collect miscellaneous items, wood pieces or metalwork in order to create that unique piece of furniture, artwork, or many other uses. The kids and I have done it for four consecutive years, with each year being successful in terms of creating something distinct and memorable. And it was always a success in terms of family bonding, great fun, and teaching kids how to use tools of all kinds.

The concept came from Jack to make a functional plinko style piece of art that kids could play and interact with (he called it a pinball machine). As it was our first year at the event, it seemed like a relatively easy plan to construct as we weren’t exactly sure how the day was supposed to play out. We found a reclaimed door and framed it at about a 45-degree angle. After that, it was off to the races as the kids rummaged throughout the store to find small obstacles, bumpers and other contraptions.  After a scoreboard was installed at the bottom, finishing touches were made. Then we found some marbles and it became an instant hit with the crowd. It was perhaps the most unattractive piece in the competition, yet was certainly one of the most popular due to its interactivity and fun for kids!  In fact, our local children’s science museum, SpectrUM Discovery Center acquired the piece to be displayed at their location to teach kids about friction, gravity, and motion. It remained there for years and was one of the kids’ proudest moments.

An idea was hatched by one of the boys to support and memorialize the Native American culture and history in Montana by building a full sized tipi. Built from reclaimed barn wood, it was the most challenging of our projects over the years due to the size and construction complexities. Despite being over 9 ft tall, it was a great success and sold at the Home ReSource auction benefit months later (although I heard there was several size issues at the benefit auction).

After the previous years’ challenging efforts, we slacked off slightly and build a good old-fashioned lemonade stand. The kids designed a fairly straightforward build with lots of hammering and drilling. They even found some fantastic wood slabs for the base and also located a money chute funnel for easy cash transactions. Real lemonade was sold during the day to raise money for Home ReSource. This item also did well at the charity auction, we heard.

The year 4 creation took advantage of the fast growing popularity of the bean bag toss game, more commonly known as Cornhole. The original structural plans took hold with the only challenge for the kids – how to drill a perfectly round hole in plywood. Next, the design phase took place and one of the kids came up with a Jackson Pollock design. Where that idea came from I had no idea, but I suspect they just wanted to throw paint. After the final painting touches, we added two welded metal drink holders, separate from the main structure. The kids wanted to keep this year’s creation for themselves, but they knew how the event works, all the pieces created are sold or auctioned off to raise money for Home ReSource.

SponCon also hosts live music and a large number of creative and scientific kids activities, although there will likely be limited activities this year due to Covid-19 restrictions. Nonetheless, it remains a fantastic Missoula tradition for families as well as for the artistic and building communities in town. And after four year of kids’ construction activities, including many power tools and sawing, there were no major mishaps. But plenty of splinters, that just comes with the territory. 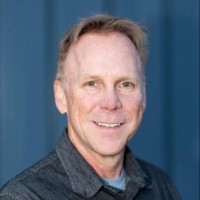 Tom Kerr is the father of three wonderful boys and lives in the great state of Montana. They adventure and travel all over the state gathering stories for 406dad.com . He has worked in the financial services industry for over 25 years and is currently a Senior Investment Specialist and Financial Advisor at WestPac Wealth Partners in Missoula, MT. Tom serves on the boards of CASA of Missoula and the Montana State Parks Foundation. He is also a member of the Montana Snowbowl Volunteer Ski Patrol. Artists Along the Bitterroot: Studios & Homes Tour Weekend Ahead